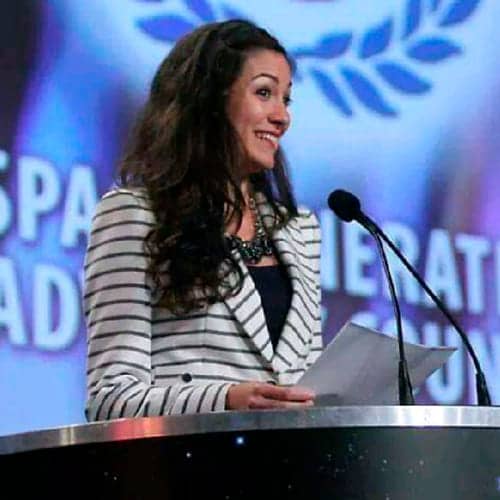 Andrea Jaime Albalat (Andrea Jaime) is a Spanish aerospace engineer currently living in Munich, Germany.  She is currently responsible for the business development of human spaceflight, microgravity and exploration activities at OHB SE.
In 2010, Andrea earned her masters in Aerospace Science and Technology,  from UPC in Barcelona (2010). Additionally, Andrea is an alumni of the International Space University’s (ISU’s) Summer Studies Program (SSP) 2009 which was hosted by the NASA Ames Research Center in California, USA, and also completed the CVA (Communauté des Villes Ariane) Summer School, hosted by Rome in 2011.

She started her professional career working as part of the organisational committees of several workshops and conferences including, ISU’s SSP 2008 in Barcelona. Since then, Andrea has worked at the European Space Agency as a Young Graduate Trainee. Based at ESTEC in the Netherlands she worked for the Human Spaceflight and Operations Directorate. In October 2011, she moved to Vienna to work as the Deputy Executive Director of SGAC, which lead her to become the Executive Director in July 2012. In 2015 she moved to Munich, Germany, and started working as Business Development Manager for OHB SE.

Andrea is an enthusiast of space exploration and strongly believes in the power of the space sector for the development and improvement of Earth.