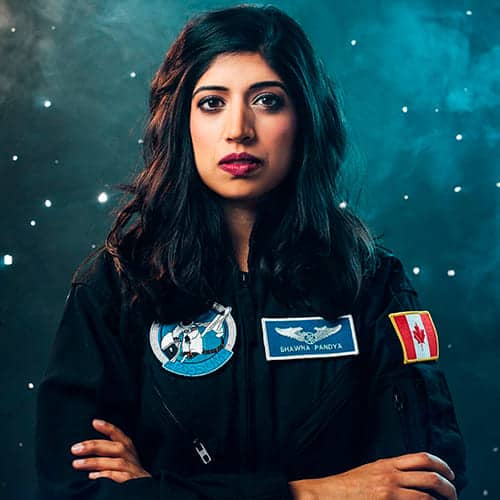 Throughout the 2020 COVID19 pandemic, in addition to her clinical work and teaching duties, Dr. Pandya has also served on several COVID19 initiatives, including serving as National Institute of Health reviewer leading a PoSSUM COVID Health Task Force to provide direction to the organization and its membership during the pandemic, directing a PoSSUM ‘Astronaut Mentality’ Webinar series on lessons from the space world for life during a pandemic helping amplify colleagues’ 3D PPE printing initiatives, co-authoring an international collaborative effort regarding guidelines for telemedicine during a pandemic, serving as an external reviewer for the Alberta Health Services Scientific Advisory Group, co-authoring a paper on lessons on resilience for life during a pandemic (in progress), and publishing YouTube video diaries about the perspectives of a physician/scientist on life during the pandemic. Throughout this time, Dr. Pandya has also continued on with virtual talks, teaching, panels, interviews and podcasts, including the UNOOSA #Space4Women initiative as a panelist, TELUS Spark’s “Yes I Can” virtual event as a keynote, A Pint of Science Canada’s nation-wide science festival as a subject matter expert (SME), and as an SME book reviewer.

In 2015, Dr. Pandya successfully completed Scientist-Astronaut Candidate training with Project PoSSUM (Polar Suborbital Science in the Upper Mesosphere) and was part of the first crew to test a commercial spacesuit in zero-gravity; her work with  Project PoSSUM and Final Frontier Design was captured in the CBC Documentary, “We Are Canada.” She has continued to test commercial spacesuits with Project PoSSUM’s annual microgravity parabolic flight campaigns, and has completed over 100 parabolas in microgravity to date. Dr. Pandya is also the chief instructor for Project PoSSUM’s EVA 102: Operational Space Medicine, which ran its first iteration in Colorado in September 2017. As part of Project PoSSUM, she also completed slow onset hypobaric hypoxia training, centrifuge studies, aerobatic flight, basic, advanced emergency spacecraft egress and sea survival training, and high altitude noctilucent cloud research. Through PoSSUM, she has also completed courses in celestial navigation, planetary geology, and space physiology and life support systems. Dr. Pandya also completed a 2-week tour at the Mars Desert Research Station (MDRS) analog in Utah as the Crew Health and Safety Officer, and led a crew as Commander in the first-ever MDRS station-to-station mission January 2020. She has recently been named as an ambassador for the PoSSUM 13, an initiative to make space opportunities and engagement more accessible to students, particularly girls and young women. She also serves as the Chair of Strategic Development for this initiative. In early 2020, Dr. Pandya was also named Director of the PoSSUM Space Medicine Group, which aims to

In 2019, Dr. Pandya attained her aquanaut designation during a 5-day underwater mission at the Jules Underwater Lodge and also completed the World Extreme Medicine Hyperbaric and Dive Medicine Course at Florida International University’s Aquarius Reef Base, where NASA NEEMO missions take place, attaining her Dive Medical Technician designation in the process. Her adventures and experiences were recently captured in the Land Rover short, released with the Apollo 11: First Steps film.

Dr. Pandya is also a professional speaker represented by the National Speakers Bureau, presenting on leadership, science, STEM, resilience, entrepreneurship and big ideas. Previous talks include closing keynote speaker at the Agency for the Science, Technology and Research as a guest of the Singapore government alongside Nobel Laureates and Harvard Faculty. She has also spoken at the University of Alberta’s Alumni Weekend Centennial Celebration, Telus Spark, Telus World of Science, Stanford University, TEDxEdmonton, schools, conferences and workshops as far and wide as India, Scotland and South Korea, TEDxUAlberta 2016 on “Success, Failure, Resilience and Pushing the Limits.” Her 2019 speaking schedule saw her give a TEDx talk at the International Space University on “Discovering Exploration,” and talks at Science North (Canada’s second largest science center) and at the United Nations in New York City (both in honor of the Apollo 50th Anniversary Moon Landing), and in Qatar.

In her spare time, Dr. Pandya practices Taekwondo (as a second degree black belt) and Muay Thai. She has travelled to Thailand annually since 2015 to train in Muay Thai fight camps. In 2016, she competed at the International Taekwondo Federation’s World Cup in Taekwondo, and in 2017, she fought in (and won) her first amateur Muay Thai fight in Thailand. She is currently working towards her private pilot’s license, and holds her accelerated free fall solo skydiving and open water, advanced, scientific, rescue and Nitrox SCUBA diving certifications. Dr. Pandya also sings and plays the piano. She is fluent in English, French and Gujarati (a dialect of Hindi), dabbles in Russian and Spanish and has recently started learning Hindi.