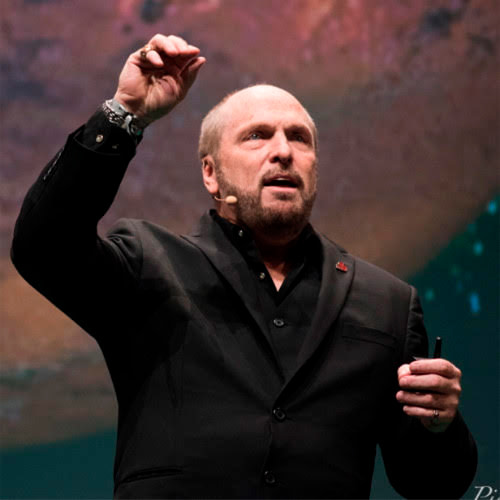 Rick N. Tumlinson’s recent book is Return to the Moon. He was named one of the world’s top “Space Visionaries” and one the top one hundred most influential people in the space field by Space News, he is the cofounder of the Space Frontier Foundation, which has been called “pound for pound the most effective space organization on Earth.” From an old Texas family whose pioneering credits include helping start the Texas Rangers and fighting in the Alamo, Rick has spent his life fighting to open the space frontier.
The son of an Air Force Sergeant and his English wife, he was educated primarily in England and Texas. He worked for noted scientist Gerard K. O’Neill at the Space Studies Institute, founded the New York L-5 Society, and was a key player in starting the Lunar Prospector project which discovered hints of water on the Moon. He also helped pass the Space Settlement Act of 1988, testified before President Reagan’s National Commission on Space, and was a founding trustee of the X-Prize. Over the years he has been a lead witness in six congressional hearings on the future of NASA, the U.S. space program and space tourism, including testifying before Senator John McCain and the Senate Space and Technology Committee on the Moon, Mars and Beyond program.

To support his activism in his early years, Rick produced the animated videos used to gain funding for the Air Force’s DC-X rocket project, the International Space University, the X-33 rocket program and the Air Force’s Space Command. He also created the first ever paid political announcement for space, which was featured on NPR’s All Things Considered. Not satisfied to just talk, write about and help get funding for projects, he has put his time and money where his mouth is. He cofounded the firm LunaCorp which produced the first ever TV commercial shot on the International Space Station for Radio Shack. He led the team which turned the Mir Space Station into the world’s first commercial space facility, and was a cofounder of the space firm MirCorp. (The story is told in the book NASA: Lost in Space.) Along the way he personally signed up Dennis Tito, the world’s first “citizen explorer”, to fly on the International Space Station, and has assisted in numerous other such projects.

Rick was also Executive Director and cofounder of the Foundation for the International Non-Governmental Development of Space (FINDS), a foundation which funded breakthrough projects and activities such as Helium 3 research, laser launch studies, and asteroid processing projects. The organization provided the first $100k in seed money for the founding of the Mars Society, operated the Cheap Access to Space Prize and supported such projects as The Watch asteroid search program. FINDS also underwrote and cosponsored a very successful series of Senate Roundtables on space issues. He founded the Permission to Dream project, which has over the years placed dozens of telescopes in the hands of schools and educational groups around the world, from Sri Lanka to Iran and Russia. In 2005 he also cofounded The Institute for Space Law and Policy, a Washington based think-tank.

A regular contributor to the space industry paper Space News, his writings and quotes have appeared in the New York Times, Wall Street Journal, Los Angeles Times, Miami Herald, Washington Post, Reader’s Digest and dozens of other publications. He has appeared on the front page of the New York Times, has been featured in two issues of Popular Science and around the world from Britain’s conservative Economist to the People’s Daily in China. He has appeared on such television programs as ABC’s World News Tonight, and Politically Incorrect and appeared as an expert guest on the CBS Evening News with Dan Rather, CNBC’s Open Exchange and is a frequent commentator on CNN. Internationally he has appeared on TV sets from Russia to China’s CCTV and the BBC.

In 2004 Rick was one of only 20 guests invited by the White House to hear President Bush announce his plans to return to the Moon and explore Mars. Often a public critic of the agency, last year he joined NASA’s prestigious Lunar Exploration Analysis Group, helping behind the scenes to lay out the framework for the first human outpost on the Moon and steps towards putting humans on Mars. He has also been a consultant to the Heinlein Prize Organization, and is starting his own space firm “XTreme Space”.

He authored Do we go to play? Or do we go to stay?, Here We Go Again, A Giant Leap Forward – or a Giant Step Backward?, Private Industry Can Help NASA Open the Space Frontier, Return to the Moon For the Right Reasons, in the Right Way, There is No Debate Between the Moon and Mars, You Can’t Call Them Space Tourists Yet, A Goal worth Dying For, and The Third Wave of Alternative Space.

Rick is known as one of the best speakers in the field of space. His stirring and freewheeling talks range from critiques and discussions of current national space policy, to the presentation of a “Frontier” ideology for opening space, to the how and why of returning to the Moon, to a deeply spiritual discussion of our place in the universe, the search for other life and the reasons we are reaching for the stars.